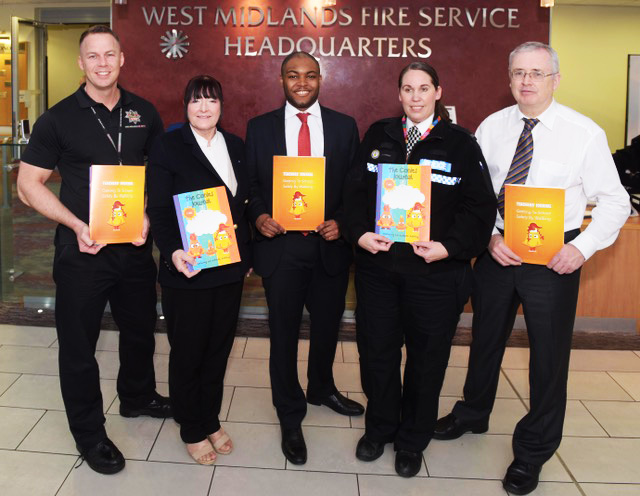 Nationwide efforts to reduce child traffic casualty rates have been boosted in Birmingham with the launch of a new road safety early learning book.

‘The Conies: Walking to School Safely Journal’ features an inspirational family of traffic-cone-shaped cartoon characters – The Conies – whose creators hope will become national or even international heroes of road safety for children.

The 40-page, fully-illustrated book has been produced and published for primary school children by Birmingham road safety ‘not for profit’ organisation DriveSafe & StaySafe with the support of the Birmingham Community Safety Partnership.

West Midlands Assistant Police and Crime Commissioner Ashley Bertie officially launched the book at the West Midlands Fire Service Headquarters in Aston in front of local councillors, teachers and members of the police and fire services.

The first 2,700 copies of The Conies: Walking to School Safely Journal will be delivered, along with teachers’ guides, free to 37 primary schools in Yardley, Hall Green and Hodge Hill. The schools were chosen to pilot the project after the 2016 Birmingham Road Safety Strategy identified the wards as child accident ‘hot spots’.

Every Key Stage 1 pupil (4-6 years) will receive their own journal, which has been designed to meet the Early Years Foundation Stage (EYFS) and Personal Social Health Education (PSHE) learning and development requirements

Ashley Bertie said: “Road safety is a key priority for myself and the Police Commissioner and this book will provide an innovative, fun and lively way for children to learn of the dangers on our roads and what they can do to look after themselves and their families.

“The West Midlands is one of the youngest regions and Birmingham is the youngest city in Europe, and our young people are our future. I would like to thank Fay Goodman and her team at DriveSafe & StaySafe for a project that will not only have significance for our region but also nationally and hopefully internationally as well.

“It is an honour to be able to launch this book in Birmingham and my thanks also go to the City Council and all our safety partners for their support for a project that has the gravitas and the ability to shape young people’s lives for many years to come.”

Fay Goodman, creator of the Conies and founder of DriveSafe & StaySafe, commented: “The Green Cross Code man and Tufty the Squirrel made such a difference to helping children’s safety in their era – and I sincerely believe our Conies will have the same impact as the new national heroes of road safety.

“Children will be able to engage by reading, listening and acting out scenarios from the Journal, and there is a review at the end to test how much the child has learnt and absorbed. Teachers will be able to keep this page as ‘evidence’ of the child’s learning and reward it with a certificate or star to offer continued encouragement.

“Now, whenever they see a road cone, we hope children will think about the Conies and the positive messages to ‘Stop, Look and Listen’ before you cross the road and ‘Keep Looking and Listening’ as you cross.”

Fay added: “I am delighted that the Birmingham Community Safety Partnership has come on board and am very grateful for their support in making this happen. Too many children are needlessly injured or killed on our roads. We have to do something which will impact in a dynamic way – and what better way than to turn road signs that are all around us into animated characters!”